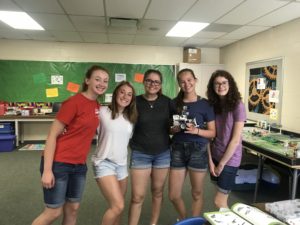 Algonac Robotics FRC Members attended our first, two day FLL (FIRST LEGO League) Mentor Camp this week to prepare for the upcoming INTO ORBIT challenge.  This will be the FLL Iron Rats third year as a team and we are looking forward to having our FRC team members mentor our team.  During the camp we built a simple robot, learned some coding basics, and discussed FLL in general.  We also talked through what the Mentors roll would be.  FLL teams compete with an autonomous LEGO robot of their own creation, to complete a series of missions for competition.  They are also challenged to come up with an innovative solution to a real world problem and present it not only to the judges during competition but also those who might benefit from their solution before competition.  They are also tasked with learning and using the FIRST Core Values as a team and out in their communities.  Having experienced mentors this season will be a big help for the team to be able to learn and grow so much more!

With Google+ plugin by Geoff Janes and Thorsten Hake